Travelling around Central Europe is an absolute paradise if your goal is to set foot in as many countries as possible. Everything is so dense, that sometimes you might be surprised how quickly you can get to place with a whole other spoken language, currency etc.

Did you know that Bratislava is the only capital in the world located on the border of three countries – Slovakia, Austria and Hungary!? The distance to Vienna is 60km, to Budapest 200km and to Prague 360km.

In this blogpost I have summed up the easiest ways to get from Vienna to Bratislava, as well as the best things to see in Bratislava in a day.

How to get from Vienna to Bratislava:

Buses run very regularly between Vienna and Bratislava, and you can get one pretty much every hour. There are a few bus companies operating between the two cities, the most popular being Flixbus and Slovak Lines. You can easily purchase a ticket online or get it from the bus driver (if there are free seats).

The buses leave either from the International Bus Terminal Erdberg or the Central Train and Bus Station (Hauptbahnhof).

Prices vary between 5 and 10 euros one way.

A train leaves every hour (16 minutes past the hour) from Hauptbahnhof and takes about 1 hour to reach Bratislava. Tickets must be purchased prior to getting on the train and you can do this either at the machines or the ticket office. Price is usually about 10 euros one way.

The train company OBB is having a great offer for 16 euros which covers your return train ticket and free use of public transport in Bratislava. To be bought at the OBB train ticket office.

The company Twin City Liner offers a scenic boat ride between Vienna and Bratislava, which is absolutely perfect for a day trip. The boat departs at 10:30 from Vienna (Schwedenplatz) and at 18:30 from Bratislava. It operates daily during the high season (from April till September) and on Fridays, Saturdays and Sundays during the low season. You can see the full schedule here.

What to see in one day in Bratislava:

The Bratislava castle fully embodies Ed Sheeran’s lyrics ‘Castle on the Hill’, as it rests on a hill above the Old Town, offering a stunning view of the city. In clear weather you’d even be able to see Austria and parts of Hungary from up there.

Originally the castle was used as a royal residence, while now it houses the Museum of History and it has turned into a symbol of Bratislava.

The National History Museum is located inside the Bratislava castle and holds a collection of almost 250 000 objects, connected with the national history, culture, arts, traditions etc. One of the most interesting parts of the museum is the treasury, where you can see goldsmith and silversmith works, representing the artistic skills and craftsmanship of masters back in the day.

St Martin’s Cathedral is the largest and one of the oldest churches in Bratislava, historically known as the coronation church of the Kingdom of Hungary between 1563 and 1830. Nowadays the church has a Gothic look, but it was actually built on the site of a previous Romanesque church from 1221. At the end of the 13th century, once Bratislava was given the privileges of a town, the church was rebuilt as part of the city walls.

In the very city centre you will find the old town hall – a complex of buildings from the 14th century, considered one of the oldest stone buildings still standing in Bratislava. Nowadays, it houses the Bratislava City Museum, which gives an overview of the city’s history.

From the top of the tower you get a charming view over the main square and the city centre, as well as a glimpse of the castle in the distance.

Another top thing to see in Bratislava is certainly the Church of St. Elizabeth, otherwise known as the Blue Church.

This is, hands down, one of the prettiest and most charming churches I have seen on any of my travels. It could easily be mistaken for something out of a fairytale.

The Blue Church is a Catholic church, located at about 10-15 minutes walking distance from the city centre. It was built between 1909 and 1913 in a predominantly Hungarian Art Nouveau style.

Micheal’s Gate is the single last standing gate from the former medieval fortifications of the city of Bratislava. The tower is 51 metres tall and can be accessed through the Museum of Arms. The view from the 7th floor is one of the must-see places in Bratislava.

At the top visitors can also see a statue of archangel Michael, slaying a dragon.

The monument is a memorial and a military cemetery for Soviet Army soldiers who died during World War II. Slavín was constructed between 1957 and 1960, and in 1961 was declared a National Cultural Monument.

With its 39-metres high obelisk and a 11-metre tall statue standing on top of it, the memorial is quite impressive, to say the least. Visitors also really enjoy the beautiful view from the top, as well as the surrounding area. Slavín is situated in a wealthy neighbourhood, just about 10-15 minutes walking distance from the city centre.

It is impossible to miss the UFO bridge, as it has become a massive part of the landscape of Bratislava. The construction of the bridge is a very controversial topic among locals, as many of them believe its look doesn’t go with the vibe of the city, and most specifically the old town.

But one thing is for certain, the observation deck from the top of the UFO platform is one of the top things to do in Bratislava, even if you’re visiting just for a day.

This is certainly the highest and best observation platform in Bratislava, and it gives you a full view over the city – both the old and the newer part.

Walking around the city centre, you will certainly notice plenty of statues. For example, you can see a statue of Hans Christian Andersen, who is known to have visited Bratislava in 1841.

Pay attention while strolling the streets, as there might be quite a few more surprising statues on the way.

One day is absolutely sufficient to see Bratislava’s highlights and enjoy learning and getting to know Slovakian culture. Considering the fact that Bratislava is only an hour away from Vienna, this gives you great flexibility to plan your time well. You could theoretically even spend a night out in Bratislava and catch a bus or a train first thing in the morning the next day to get back. The possibilities are endless.

On my last day trip from Vienna to Bratislava I went by this exact itinerary (+ a lovely slow-paced lunch at a typical restaurant) and the time was more than enough. For reference, we left Vienna at about 10am and got back at 8pm.

I hope this blog post was helpful and with this Bratislava itinerary you will be sure to have seen the highlights and most important spots in the Slovakian capital!

25 Free Things to do in Vienna, Austria

The Vienna Cards Explained! Which one to choose – Vienna City Card or Vienna Pass?

Vienna Insider Tips – What to know before visiting?

Explore Vienna on a Budget

Where to Find the Best Schnitzel in Vienna – Tips + Prices! 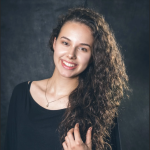 Lyubomira is the creator behind Bulgarian On The Go, an absolute travelholic and an avid dreamer. With a background in journalism and experience in the field of tourism, she is on a mission to show us the world through her lenses and inspire her readers to dive into more adventures.

Hi! I’m Lyubomira - the face and soul behind this blog. After finishing my degree in Austria, my heart brought me back to my home country - Bulgaria, where I'm currently studying Tourism. My biggest goal is to help you find hidden gems around the globe and inspire you to visit places you never knew existed.