- This article contains affiliate links. For every purchase made through one of these links, I receive a small commission, at no extra cost to you. Thank you! - 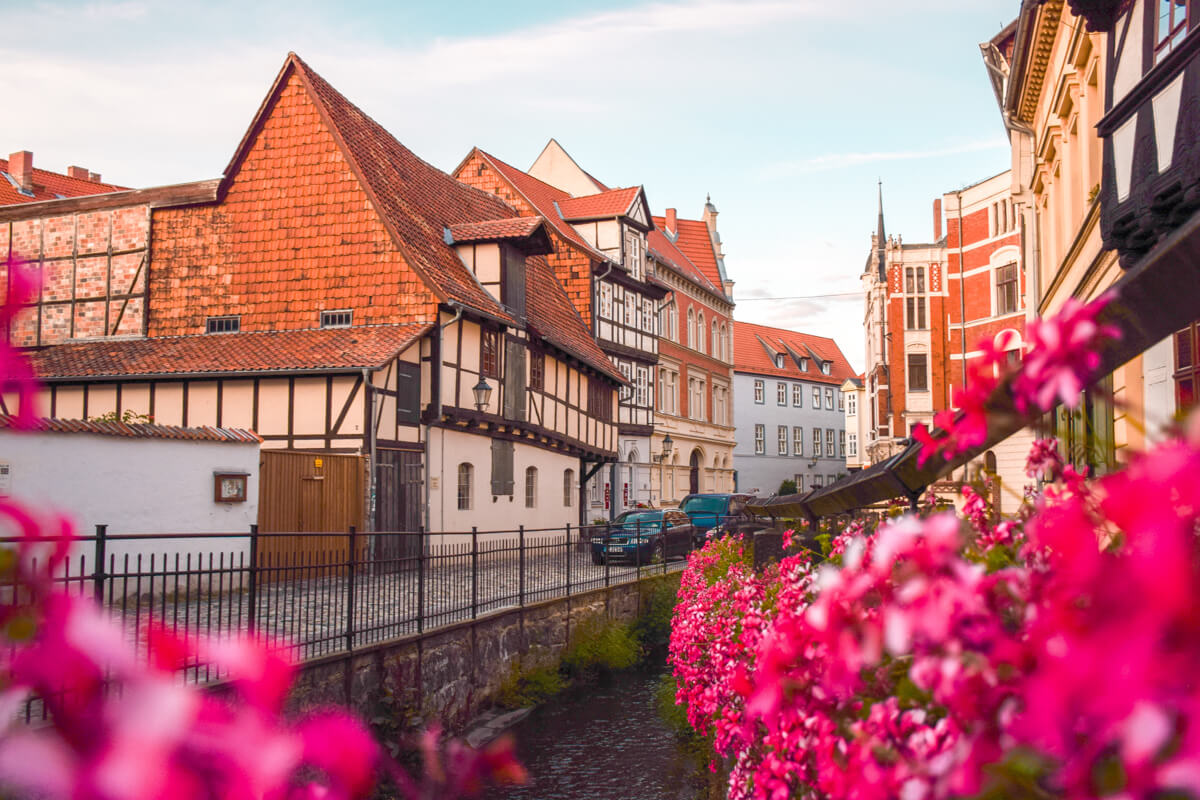 Nested in the Harz Mountains region, Quedlinburg is lovely town, characterized by over 1,300 unique half-timbered houses, making it by far one of the few most preserved medieval towns in Germany.

Surprisingly, Quedlinburg is one of the most underrated and off-the-beaten-path destinations in Germany. Especially considering the fact that it’s an old imperial city and UNESCO World Heritage Site.

I had the pleasure to visit Quedlinburg for a couple of days in August and I must admit, this was one of the most beautiful and peaceful places I have ever been to.
If you’re looking for a not so popular German destination, or you’ve already decided to go on a trip to Quedlinburg, then this guide is perfect for you.

We will cover everything from how to get to, where to stay and what to do in Quedlinburg.

How to get to Quedlinburg

Quedlinburg is located in the northern parts of Germany.

Quedlinburg is also easily reached by regional trains from Hanover or Berlin. From Hanover the train takes approximately 3 hr 20 mins, and from Berlin – 4 hours.

You can also use the various bus services, which offer regular connections to Quedlinburg through many places in and outside of Germany.

As I was previously in Luxembourg, in order to get to Quedlinburg I had to take an overnight bus to Berlin. From here I took another Flixbus, which was a nice 3-hour-journey for approximately 20 euros.

Things to do in Quedlinburg

Quedlinburg is quite a small city, but for it size it has a lot to offer. A full day may not even be enough to see absolutely everything and enjoy the ambience.

Here is a list of the top things to do and see in Quedlinburg, which should make your trip planning much easier and give you an overview of what you should expect from the city.

The best starting point when exploring Quedlinburg is undoubtedly the market square. The square is beautiful, to say the least – surrounded by numerous old half-timbered houses, some cafes and restaurants, as well as important buildings. This is where you will find the Tourist Information – get your city map from here and set yourself for the upcoming adventure! 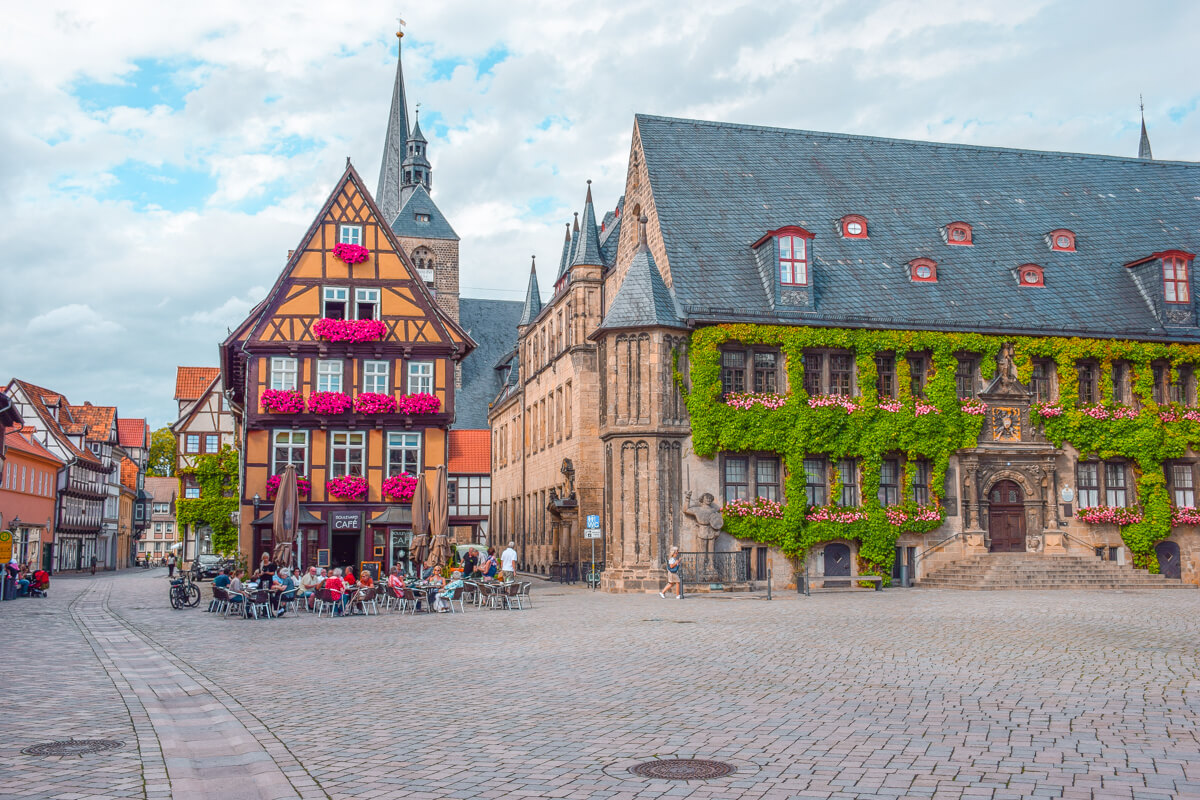 Right at the market square you will also find the city hall, or so-called Rathaus. You just cannot miss this impressive building, made completely out of stone in the typical 13th-14th century Gothic style,  with its facades coated by ivy.

There are a few things worth mentioning about the building. Above the door you can see the city’s coat of arms, which is also noticeable on the ground on the left side in the form of a mosaic.

Behind the mosaic there is a statue of a knight with a sword and shield, serving as a symbol of the town privileges of Quedlinburg.

The church dates back to the 12th century and it has still preserved some of its Romanesque look. It is possible to climb up the tower and enjoy a beautiful view from the top. 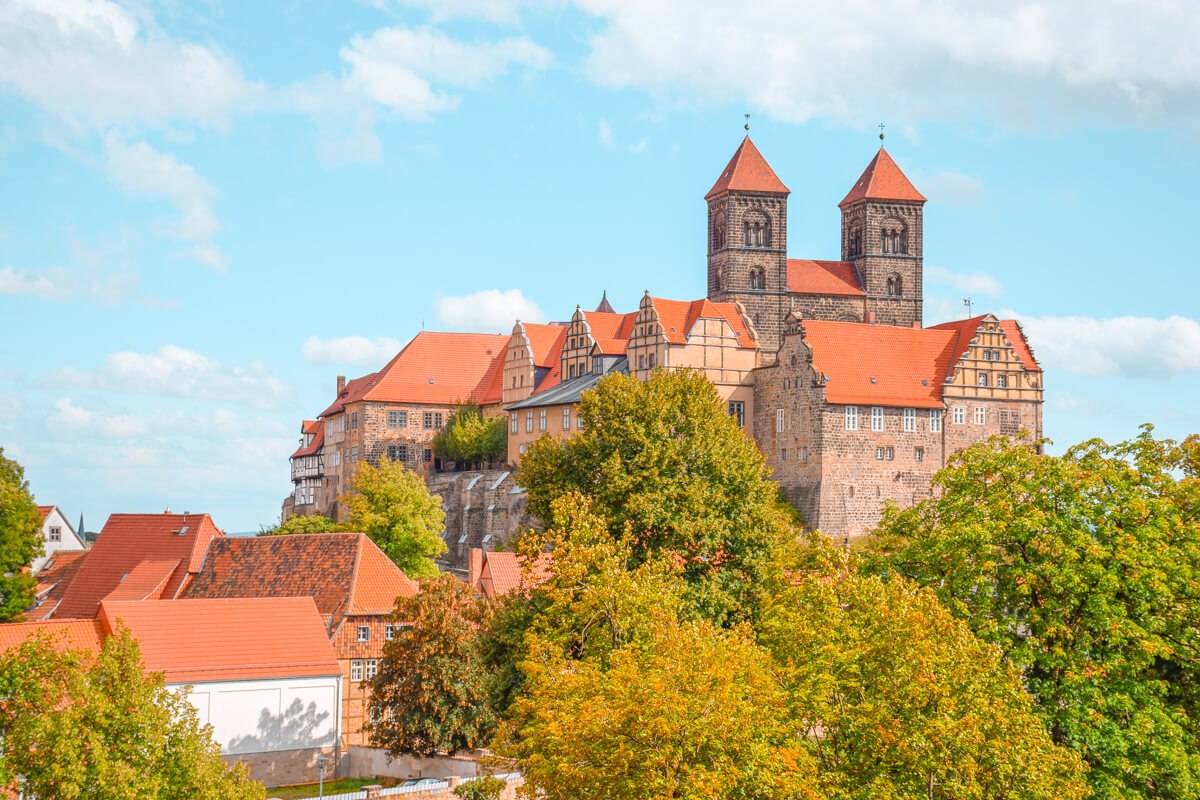 St. Servatius church serves as a monument to St. Dionysius and Servatius and it’s dedicated to the history of the High Romanesque architecture. After it was built between the 11th and 12th century, the church belonged to the Quedlinburg Ladies’ Foundation.

Since 1994 it is included in the UNESCO World Heritage List, together with the old town and the castle.

The Schlossmuseum (or the Castle Museum) is located in Renaissance castle from the 16th/17th century, where you can experience and learn about a big part of the German history. The museum provides a great overview of the development of the region and the city, and visitors are able to see the oldest profane architecture the region of Saxony-Anhalt.

One of the top things to see in Quedlinburg is definitely the district called Munzenberg. Munzenberg is located on a hill above Quedlinburg and it is easily reached by foot in a matter of 10-15 minutes from the city. The view from the top is spectacular, so don’t forget to make a few quick stops along the way and take it all in.

The museum at Munzenberg is free to enter and it provides an overview of the history of the Münzenberg, where you can also see the preserved convent church – a beautiful Ottonian basilica. 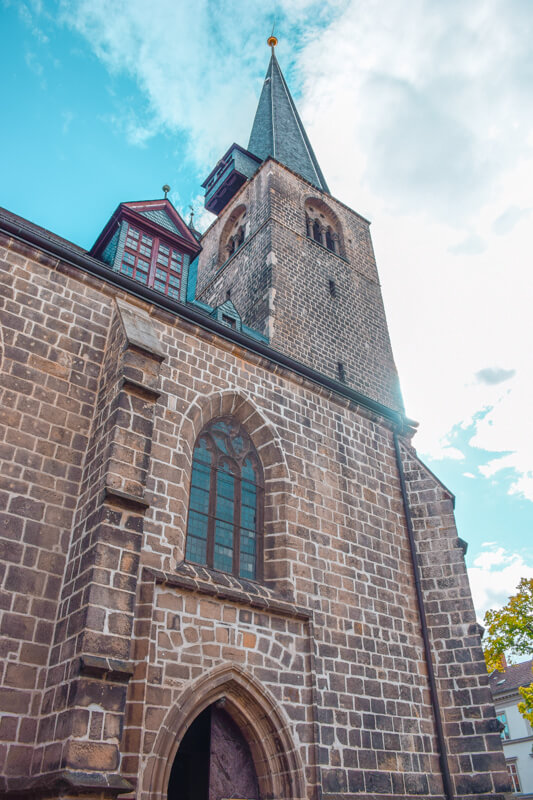 St. Blasii church was first mentioned in a document from the year 1222. However, the building probably dates back to the 10th century, remains of which can be seen in the present tower. This oldest version of the church was replaced in 1267 by a magnificent building that stood until 1711, after which it was transformed in Baroque style.

With the support of the German Foundation for Monument Protection, the church was extensively restored in the 1990s, after it had not been used since 1952 and the building structure had deteriorated considerably since then. Nowadays the church is mainly used as a cultural venue for book readings and concerts.

The Klopstockhaus is the birthplace of the poet Friedrich Gottlieb Klopstock, one of the founders of classic German literature. At that time his work was read more often than his contemporaries Goethe and Schiller. Today, the Klopstockhaus is turned into a literature museum which provides information about Klopstock’s life and work, but also about other important people from Quedlinburg.

St. Wiperti is a church dedicated to St. Wigbert and St. James. It is considered an architectural masterpiece of the Romanesque, and the church and the crypt testify to its important past as the royal court of the Saxon-Ottonian ruling dynasty.

The upper building served different purposes during the centuries – it was a male monastery until the Reformation and for some time it was even used as a barn, before its restoration after the Second World War. 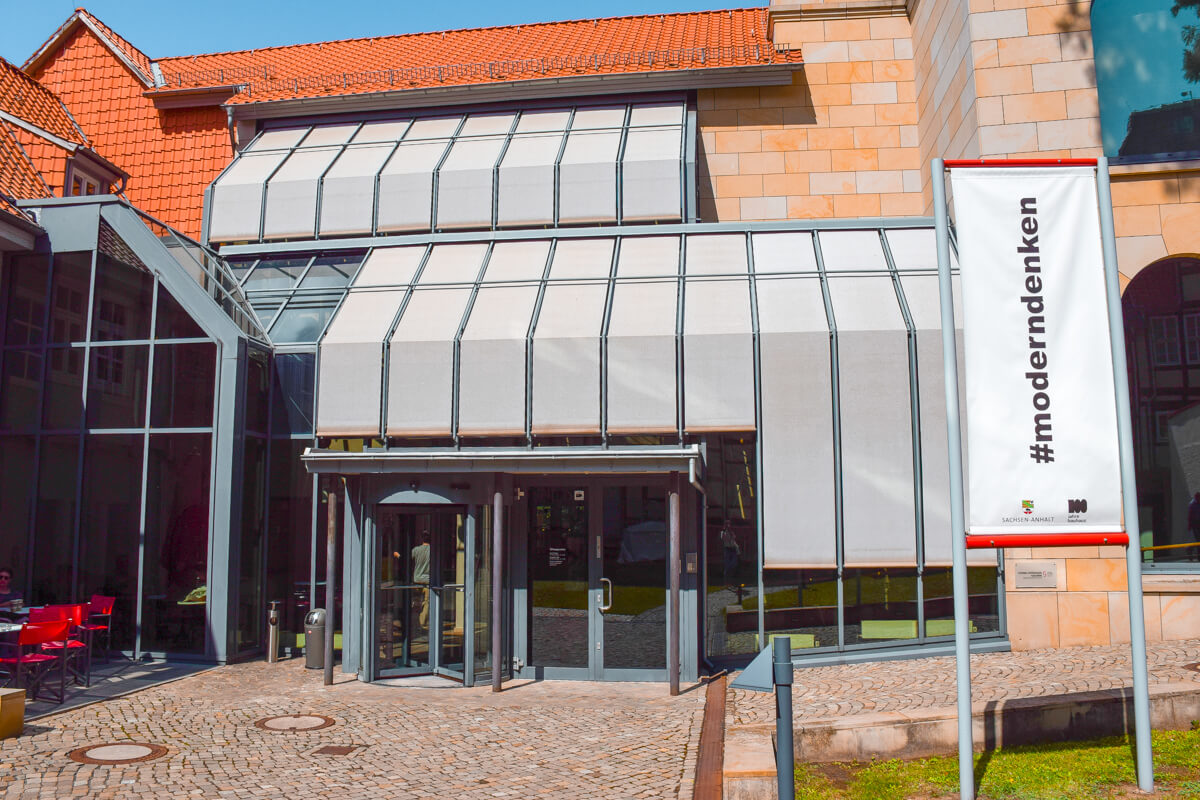 The Lyonel Feininger Galerie is an art museum, which opened back in 1986. It shows works of the famous artist Lyonel Feininger, which had been preserved by the Quedlinburger Hermann Klumpp, a former classmate of his, before the destruction by the National Socialists. The collection of Feininger works in Quedlinburg is one of the largest closed collections of prints, etchings, lithographs and woodcuts of the artist and also the only Feininger Museum in Europe. It documents all his creative periods from 1906 to 1937. 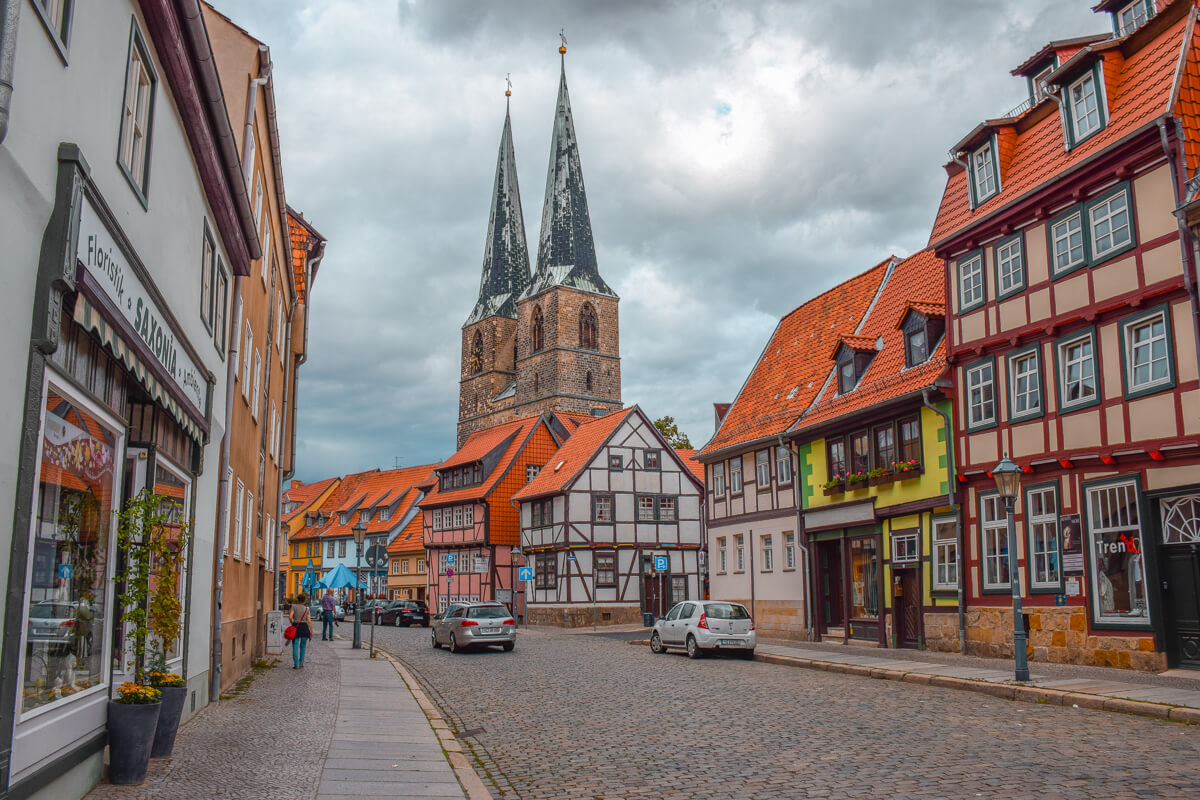 St. Nikolai in Quedlinburg is the parish church of the new town in Quedlinburg. The church was first mentioned in a document in 1222, making it the oldest church in the Neustadt district.

It’s important to point out an important woman – the pastor’s wife Dorothea Christiane Erxleben, whose husband Johann Christian Erxleben was pastor of the church in the 18th century. She received her doctorate in 1754 at the University of Halle as the very first female German doctor. 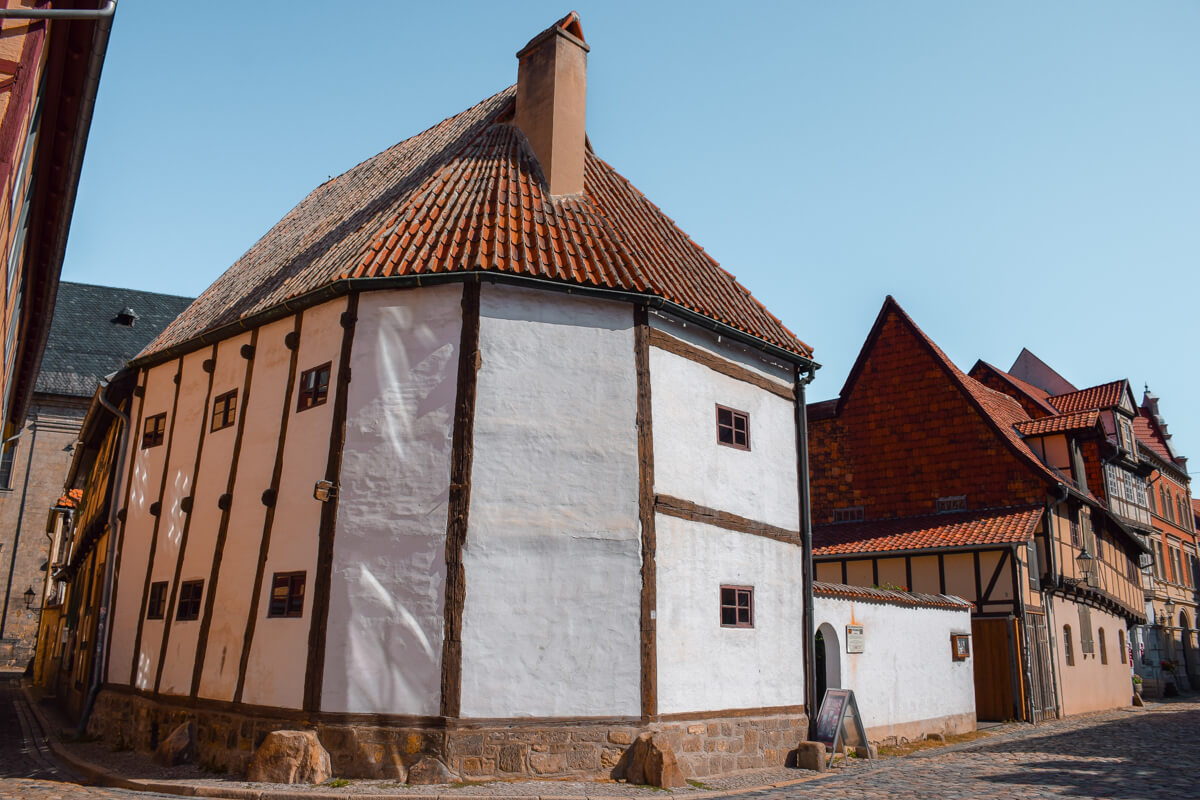 The Hochständerhaus is architecturally not the most beautiful, but probably the oldest half-timbered house in Quedlinburg. Investigations have found the construction period for the building to be around the year 1310. This makes it one of the oldest surviving half-timbered buildings in Germany. The house was inhabited until 1965.

Even though the construction has been changed and renewed throughout the centuries, technical studies have shown that about 65% of the framework is still original.

If you want to experience the “green side” of Quedlinburg, then head to Park Brühl. The park is located south of the Schlossberg and it’s about 15 acres big.

The park is included in the Garden Dreams’ conservation – a list of 50 historical parks in the region of Sachsen-Anhalt.

One of the most magical times to visit Quedlinburg is undoubtedly during winter. In the month of December is when the main square comes to life and the Quedlinburg Christmas Market lightens up the whole city. The market consists of numerous stalls from where visitors can buy delicious food, mulled wine or fruity punch, as well as some Christmas decorations and crafts.

Where to stay in Quedlinburg

During my 2 days in Quedlinburg, I stayed at the Acron Hotel – it is on the more affordable side and it is only about 5-10 minutes walk from the city center. This is in fact not far at all, but when I told a local I was staying there, they reacted with the words “Oh wow, that’s quite outside of the city center”. If you don’t mind walking a bit, I would definitely recommend the place, since it is definitely amongst the more affordable ones in the city.

Where to Find the Best Schnitzel in Vienna – Tips + Prices!

Did you find this post useful? Save it for later! 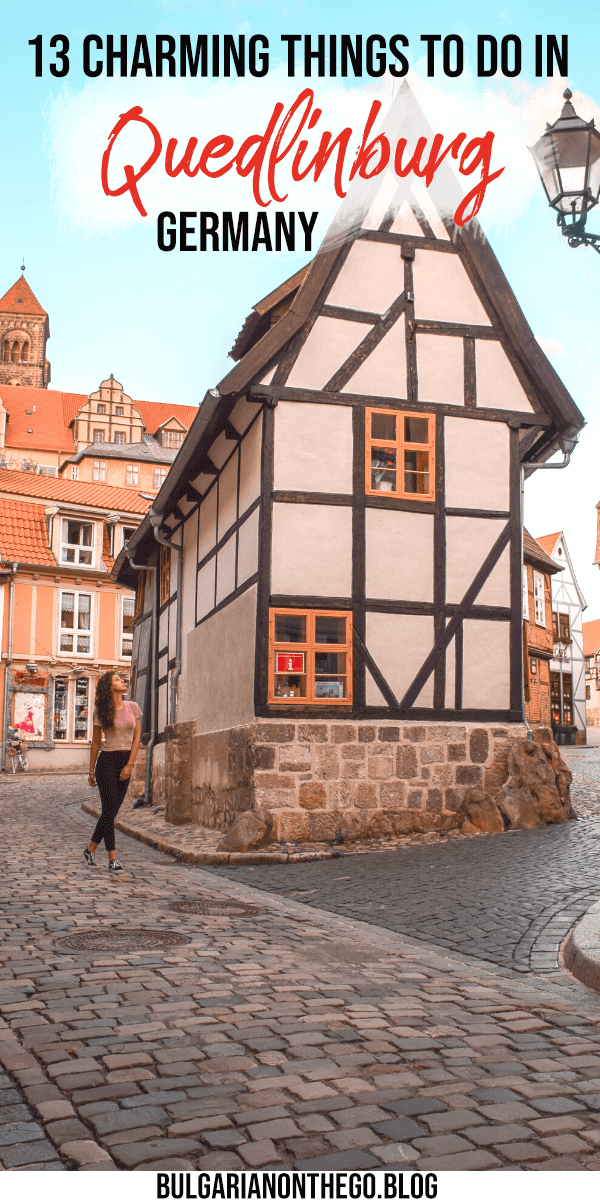 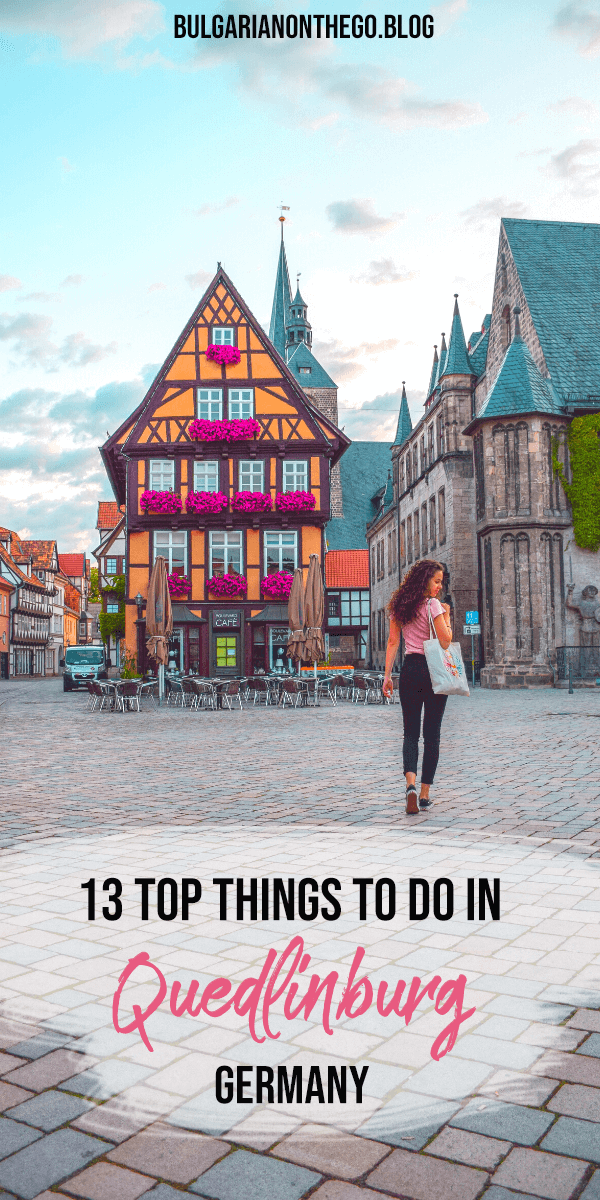 Hi! I’m Lyubomira - the face and soul behind this blog. After finishing my degree in Austria, my heart brought me back to my home country - Bulgaria, where I'm currently studying Tourism. My biggest goal is to help you find hidden gems around the globe and inspire you to visit places you never knew existed.